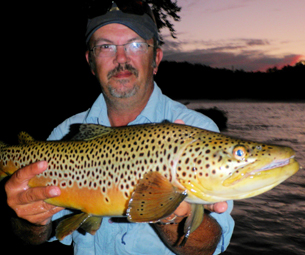 Steve Dally is a 5th generation Tasmanian transplanted to the White River in Arkansas. His earliest memories involve fish, water and boats, initially in saltwater, offshore and inshore. The fly rod became an instant addiction. He travelled widely with fly rod and camera grounding his knowledge of North American fisheries before settling on the White River. His articles and/or photographs have appeared in Flylife Magazine, Fly Fisherman, the Drake and other publications. He has guided on the tailwaters of the White River since '04 and is a partner and manager of Dally's Ozark Fly Fisher in Cotter, AR.