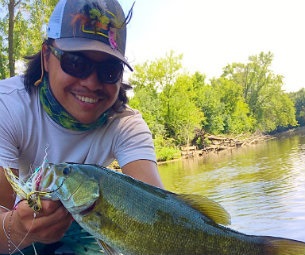 Ryan Siron did not grow up fishing exotic flats or freestone rivers like many other notable anglers. He grew up chasing Bluegill, Bass, Pike, Muskie, and, Carp in the man-made ponds, tree-choked rivers, and glacial lakes of the North Eastern suburbs of Chicago, Illinois as well as South Western Wisconsin. He's not shy to admit he drowned bait and threw lures during his early years. However when he held an old fly rod a friend handed to him, it was love at first cast and as they say, "The rest is history". Since then, he's been privileged enough to fly fish in places like Montana, Wyoming, Colorado, Hawaii, Georgia, Florida, and other states. However, after all the places he's been, and plans to be in the future, the warmwater fisheries of the Midwest will always hold a special place in his heart. When he's not fishing and exploring new bodies of water in his neck of the woods, Ryan can be found at the bench pushing the envelope in fly design, writing articles and sketching art for a Tight Loop and Dun Magazine, or sipping craft beer around a campfire with good friends.