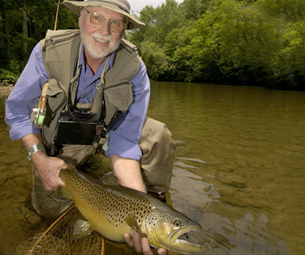 I come from a long line of fly fishermen and tiers. My great-grandfather, my grandfather and my father were all avid anglers. I still have my grandfather€s old Abercrombie and Fitch cane rod and an old sheepskin fly wallet with four or five-dozen flies he created. My love of tying came from my father€s efforts at the bench, where he excelled. I learned a great deal watching the intricacies of tying through observation and pretty soon I was catching fish on my own flies. I guess I tried everything - wet flies, nymphs, dries, streamers, etc., and, being raised in Alabama, I learned that bluegills, €red eye€ bass and a bunch of other warm-water species were fine game on fly rods. Finally we planned a trout-fishing trip to Tennessee and North Carolina and I lost my heart. It was on those streams that, using my little brand new South Bend cane rod, I became truly infected with the "trout virus" and I have never recovered. Now, years later, I look back on that time and realize that it was these experiences that taught me the true intricacies and "art" of tying. Having no formal instruction was the best €teacher€ that I could have had, requiring me to become innovative and imaginative, to be creative and to listen to what the materials were trying to tell me. To make a long story short I was not happy with the flies were available on the market, particularly terrestrial patterns, with which I have had a life-long love affair. It was simply a matter of having to design patterns that I thought would be better than what was available. I never dreamed that some day the patterns that I created and the techniques I learned, mostly on my own, would be made available to others. Whatever success I have had as an author and a fly designer is still a surprise and a mystery to me and I hope it will always remain that way. The real satisfaction is to know that others enjoy fishing with patterns that I have created, have success with these patterns, and end the day with that incredible feeling that taking a few good fish engenders. That is more than enough satisfaction for anyone.