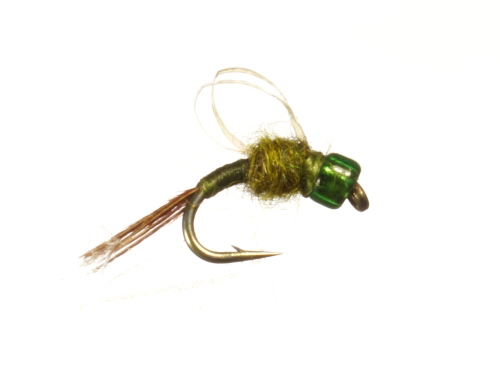 The mostly overcast morning was just starting to warm up on the Provo River and the springtime baetis hatch was on. Fish were excitedly starting to boil all around and out of the corner of my eye I happened to notice the old, grizzled veteran upstream landing fish hand over fist. No matter how excellent my honey-hole appeared, or how perfect my cast I just couldn’t coax them to take my dry fly. After an hour of frantically switching up rigs, sizes, colors, patterns, and making extra sure to have a drag free drift I was still only seeing minimal success. Oh, the frustration! What was it that I was missing?

As I climbed out of the water a bit dejected and cursing the trout a little under my breath, that veteran I’d been watching approached me asking how the fishing had been. I told him it truly was a perfect day for fishing, but some days…the fish just win. After a hearty chuckle, I apprehensively asked him what his secret was. A smile crossed his bearded face, he simply reached into his old weather beaten vest, pulled out a hastily tied, little green fly, and placed what he called the ‘Provo River Special’ into my hand. He explained that he was simply fishing this little emerger pattern about two feet behind a small Blue Wing Dry, which acted more as “an indicator for an old pair of eyes” during a hatch where the fish are feeding in the film.

To this point, I hadn’t really dabbled with emergers but I witnessed first-hand how truly effective this simple approach had been. As he was leaving, I asked him if I could replicate his pattern, tweak it a bit, and come up with my own idea based loosely on his. Again, he chuckled heartily and told me to go right ahead for he had learned it from a life-long river guide, and he’d learned it from another river guide, and so on and so on as often happens.

Although his pattern was extremely simple, I’ve added a small tail to emulate the trailing shuck, a glass bead for just a tiny bit of weight and color that should still hold in the film, and the looped wings to emulate the iridescent wings/wing case as they emerge. Fished alone or trailing a dry either on, or just below the surface, this is an extremely effective emerging baetis, midge, or PMD imitation and has been a staple in my Mayfly box ever since.

Todd has spent the better part of his life intensively facing the challenge of fly fishing. He has been involved in nearly every aspect of the fly fishing industry including fly tying and rod building instruction, retail sales, and has guided on the Blue Ribbon Provo River in Utah since 1997. He has also spent a great deal of time fishing in Texas, California, Wyoming, Hawaii, Alaska, and Mexico. He is an avid world-wide fly fisher and fly designer for Rainy’s flies.