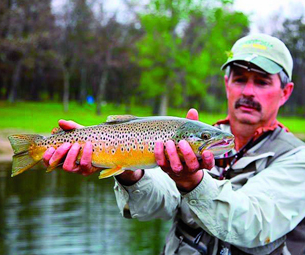 Born in Grand Rapids Michigan in 1955, I was raised west of town near streams and lakes but had little desire to fish while watching my older brother put worms on a hook and wait for hours it seemed to catch a bluegill. When one day I read something in a Field and Stream about wrapping a feather on a hook to catch trout I somehow got hooked on flyfishing before I ever did it. Using the small tool vise we had in the garage, I actually tied flies before I ever had a fly rod. The bluegills in the private pond we snuck in to hit anything that but it was the wily and gargantuan chubs in the creek near home that taught me to dead drift a dry and detect the subtle strike to a nymph. I had myself convinced they were rainbow trout because they had a little red on their silvery sides. I could not however, explain to myself the horns on their heads. When I did catch my first rainbow and brown trout in the Little Manistee River I realized what a real trout was. In the next forty years I was a failure at college, factory work, married life, and being a musician but while losing all these battles I still won the war by making a living as a fishing guide, both in Michigan and Alaska, and by living a mile from Michigans Pere Marquette River which is the most diverse and challenging river fishery I have had the good fortune to catch fish in. The atlantic salmon of Labrador, the steelhead of BC, the rainbows of Alaska, and the bluefish of Maine were all great fishing experiences but the fish of the Michigans PM are still my biggest teachers. I do wish I had a picture of that 12€ creek chub though.