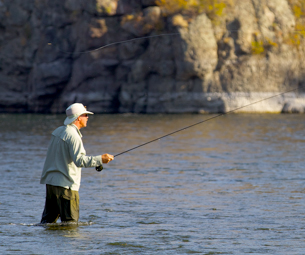 Ken Burkholder was born and raised in Boise, Idaho. He began fishing the small creeks of the Boise River drainage as a youngster and as a teenager began immersing himself on Silver Creek and the South Fork of the Boise, always fishing flies he fashioned himself.

Along with fly fishing Ken played the oboe. He pursued and earned both a Bachelorʼs and Masterʼs degree on the instrument. After performing with the Boise Philharmonic for over thirty years, Ken now is concentrating on the fly fishing industry full-time.

After twenty-five years of guiding Ken has rowed the Snake River below Palisades Dam for over 10,000 hours and witnessed millions of casts while covering nearly 25,000 river miles. Thousands of trout have been landed from his boat. His fly designs have evolved from this experience of observation on the water and aims to tie flies that imitate insects behaviorally.

Perhaps his best known fly is the Club Sandwich® (1997) grasshopper pattern which gave birth to a new generation of three-layered foam flies with knotted rubber legs. His Parachute Humpy, Bear Back Rider, Rainbow Warrior, Mahogany Emerger, and Club Sandwich® assisted six winners in the Jackson Hole One Fly the last twelve years. Twice his flies have had the single highest score on the Jackson side of the event. In 1998 Ken won the South Fork top guide in this contest.