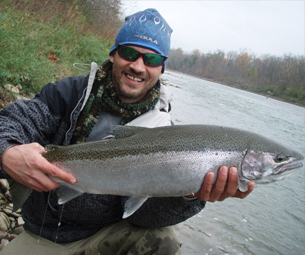 Erik Ashlin grew up in Southwest Va. and started fishing at the age of 3. Since then he has mastered all aspects of fly fishing for trout and steelhead which he now passes on to others and has been for the last 15 years. He now resides in North Ga. and is the owner of Eastern Fly Fishing Club which has over 5 miles of pristine rivers to choose from that are fished for trophy trout. He also hosts trips from NY to Fl. fly fishing for trout, steelhead, smallmouth, muskie, tarpon and red fish. Erik's mentors through the years have been Lefty Kreh and Jon Cave. With the knowledge from two of the greatest casters and fly fishermen that ever lived, Erik has one of the best casting schools in the South East and has taught many guides as well. He started fly tying at the age of 12 and is now well known for his hellgrammite pattern the "Ashlin's Hell-Raiser".