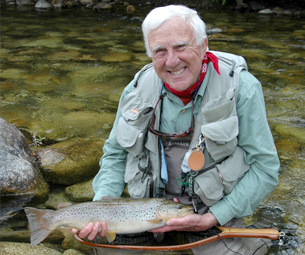 Dave is a native Oklahoman who resigned his position as a research chemist, more than 30 years ago and pooled his talents in painting, illustrating, writing, photography, fly fishing, fly tying and lecturing to embark on a new career as a full-time professional in the art of fly fishing. Dave's art and writing appear regularly in many fly-fishing and sport publications such as Fly Fisherman Magazine, Fly Fishing and Tying Journal, Trout Magazine, In-Fisherman and Field & Stream. He's written four books: Dave Whitlock's Guide to Aquatic Trout Foods, the L.L. Bean Fly Fishing Handbook, the L.L. Bean Bass Fly Fishing Handbook and Imitating and Fishing Natural Fish Foods for Lefty's Little Library. . Dave has also co-authored or contributed to many other books, including The Flytyer's Almanac, Second Flytyer's Almanac, Art Flick's Master Fly Tying Guide, McClane's Fishing Encyclopedia, Migel's Stream Conservation Book and Masters on the Nymph, and others. He's illustrated more than 20 books including Steve Raymond's Year of the Angler and Year of the Trout plus President Carter's Outdoor Journal. Dave also demonstrates his fly-fishing and teaching skills in eight videos and through guest appearances on televised fly-fishing programs. Dave's experience and creative outlook on the whole spectrum of fly fishing have earned him the reputation of being one of the top professional fly fishers in the sport. He has been the recipient of many awards for his fly-fishing and fly-tying contributions, including induction into the National Fresh Water Hall of Fame, the Max Ander's Wild Trout Award for his work on propagation of wild trout and the Federation of Fly Fishers' Conservation Man of the Year Award. Dave has also received the Buz Buzeck Flytyer's Award which is the highest honor in the fly-tying world. It recognized his innovativeness in new fly-tying patterns and his national fly-tying activities. . Dave was given the FFF James E. Henshall Award for his work in warm-water fishing and conservation, and received FFF's Ambassador Award for national and international promotion of fly fishing and conservation. In 1996 he was inducted into the Arkansas Game & Fish Hall of Fame and was given the Lifetime Contribution Award in 1997 from the National American Fly Tackle Trade Association. . One of Dave's most notable contributions to wild trout management and preservation is the Whitlock-Vibert Box System -- a unique and efficient instream salmonoid egg incubator and nursery devise. Dave spent seven years researching and developing this system and wrote and illustrated an instructional text, the FFF Whitlock -Vibert Box Handbook. Today, under the sponsorship of the Federation of Fly Fishers, this Whitlock-Vibert Box program is used throughout the world for introduction or enhancement of wild trout, char and salmon stocks. He has always been a champion of cool and warm, as well as cold water fisheries and is known internationally for his innovative and effective fly-tying designs, including the popular Dave's Hopper. All of Dave's work, especially his art, reflects the realism of nature and related fly-fishing subjects through the eyes of a true sportsman.