Well, Spring is upon us and if you are anything like me, you are itching to go fishing! One species that are known to come out and play in early spring are Muskie. They have definitely been on my mind, so I began thinking about experimenting with various flies. Rainy’s just happens to have a rather different popper head that will help make a fun fly to tie and try out. 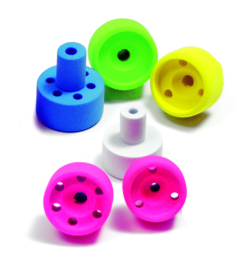 Rainy’s Turbo Poppin’ Head was originally designed as a popper head teaser for off-shore fishing like Sailfish and Marlin, but it can easily be used for larger warmwater patterns as well. Even turning your subsurface streamer into a surface popper, by just sliding it on the front of your fly. Another option is to make the head part of the fly, just like a normal popper head.

Jesse Riding uses one option on this colorful popper. He doesn’t attach the popper head on the front of the fly permantly, he just slides the head on the front. When he catches a fish, the head slides away from the fly so it makes it slightly easier to get out of the fishes mouth. Jesse mentioned he used this fly in Canada with success.

What I decided to do when I used the Turbo Poppin’ Head, was to tie it in as a normal popper head. I just built up some bulk around the shank with some dubbing and I glued the head to the fly. It now acts like any other head. What I’m trying to achieve is making quite the splash when I am using this popper to possibly attract a Muskie. 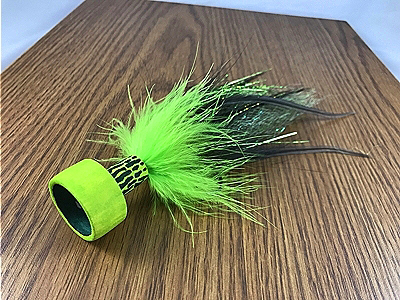 As you can see, the Turbo Poppin’ Head can be used in a multitude of ways. We invite you to give this popper head a try yourself in warmwater. We believe it has a great deal of untapped potential.

Paul J. Beel is the owner and fly tyer of FrankenFly. He pursued his passion of fishing after watching his grandfather create homemade lures as a kid. He felt he could continue in his grandfather's footsteps as a fly tier. Paul specializes in modern streamers and classic Michigan dry flies for bass and trout.
He is an Orvis Fly Designer and ties for many fly shops in the Midwest. His flies have appeared in Fly Fusion Magazine, Tail Magazine and North 40 Fly Shop Emag. He is also the creator of his own line of fly tying dubbing called FrankenDub.