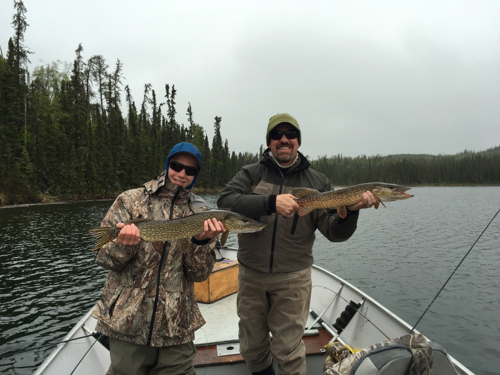 In your life, as you grow older, there will be very few experiences that will have lasting effects on your life. For me, there is a myriad of events that come to mind. I think of the day I got married, my first fish on a fly rod, the days my children were born and several other times watching my kids grow up and hitting milestones of their own.

In early June, I achieved a milestone in my life that I will never forget. A milestone that not only had personal achievement and significance, but the satisfaction of watching my boy, who is just now coming of age and progressing in the sport of fly fishing, independently grow and achieve the same goal. I am speaking of a week-long fishing trip I took with my oldest son into in northern Saskatchewan to chase pike on the fly.

This past winter an opportunity arose that allowed me to take my son, my friend and his son, on a fishing adventure up to Reindeer Lake Trout Camp to catch monster pike, lake trout, and walleye. I quickly jumped on the offer. Not only had I never caught a northern pike on a fly, but finally take my son on an adventure of a lifetime. 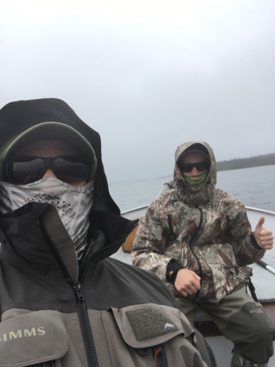 We started planned the trip months in advance preparing and acquiring the proper equipment. The boys practiced casting 8 wt rods on the lawn and even spend time at the vice creating their own pike fly concoctions (of which were very successful I might add). Allowing them to be part of the preparation fueled their excitement.

The drive from northern Utah to the shores of the massive lake took about 22 hours. We passes the time seeing the country and visiting amongst ourselves. After a couple days of driving we arrived and met our lodge shuttle (boat) for the ride to the lodge, where we stayed for the next 5 days.

Nestled in a pristine bay of Reindeer Lake about an hour boat ride from the dock rests the infamous Trout Camp (troutcamp.com). A rustic camp that makes you feel that you are in the wilderness without sacrificing some of the comforts of home. A nice warm bed, shower, and three square meals a day is all you really want on such an adventure anyway. Any more than that and you might not appreciate where you are. It was perfect and the guides and staff at the lodge were fantastic. We, along with 12 other guests, were treated like family as we all visited and dined with each other each night and caught up with the day’s adventures and trophies.

Each morning we, along with our native Cree Nation guides that have navigated the waters of Reindeer Lake their entire lives, embarked into the north expanse of waters to catch elusive pike over 40 inches. To say that the waters are rampant with fish would be an understatement. We could pull into a small bay and catch over 15 fish in less than an hour. By the end of the day you could very possible have over 100 fish to your boat.

The first couple of the smaller fish would be kept to eat later for a shore lunch, FYI the smaller ones taste better. At noon each day we would pull into a nice beach and have a traditional Canadian shore lunch. The menu consisted of fried fish, potatoes, beans, and canned fruit, which would more than fill you two times over. They cooked it all over a quickly made fire in a big steel skillet. Following the lunch we would embark back out onto the water to fish for another 3-4 more hours. 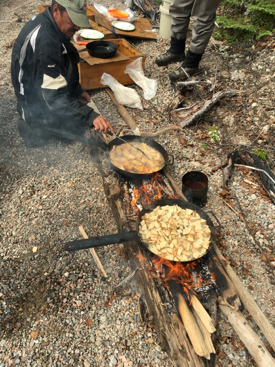 Our quarry were all toothy critters. Steel leaders or bite guards of any kind were a must! Standard leader and tippet material were no match for the reckless fish inhabiting Reindeer Lake. We found that attaching a clasp or swivel to the end of the bite guard easily allowed for switching out different flies.

Shortly after motoring into the first bay we were into fish. I put my son Andrew on the bow of the boat while I sat back in the middle of the hull. I tied on a red and yellow CF Whistler and cast it into the eerily still waters of the bay. Andrew chose a black articulated leech he had tied up himself. Within a few casts I had my first pike on. He wasn’t huge, but a good start for the day. Andrew also was quickly tied up with a pike and I proudly watched him work it to the boat. Once the fish was in the net and a quick picture was taken, he sat on the deck of the boat taking it all in with a big grin on his face. A good 30+ incher. I could tell he was relieved that he finally was on the board and also amazed by the fight and size of the fish he just caught. The biggest of his life by far! “Wanna do that again?” I asked. “Heck ya!” He replied. And with that, he jumped back up on the deck and started casting his fly back into the zone. More fish quickly came to hand and we started catching larger and larger fish. Within an hour I had broken the 36 inch barrier and was going for the 40+ incher. 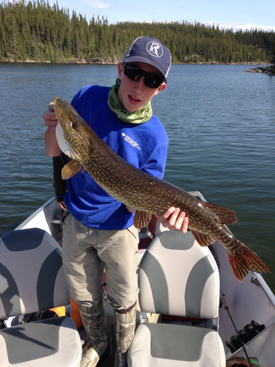 Several times throughout the day we both hooked up at the same time with these apex predators, we would both laughed as we fought the fish toward the net. By the end of the first day we could not believe the experience we had had and were looking forward to more in the following four days.

We found great success on an assortment of black leeches, chartreuse and white baitfish, flash-tail whistlers, firetiger pike flies and an olive salamander pattern. Later in the week we had fun throwing surface poppers and wounded baitfish patterns to aggressive pike.

The same experiences were told by the other father and son team with us on this adventure. By mid-week the boys were so proficient at casting and catching fish we sent them out together to enjoy each other’s company and do what boys do best... visit, laugh, and of course catch lots of fish. Each night as we all returned to the lodge we would tell each other the stories of large fish and of course...the ones that got away. 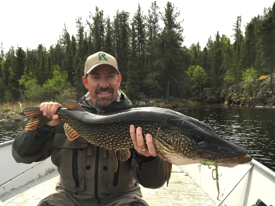 We repeated this every day and like clockwork we got into bigger and bigger fish. Finally we all had caught fish over 40 inches, the largest being a girthy 45 inch fish. Anything over 36 inches would give you a run for your money, so when you got one of the brutes you surely felt it.

I cannot fully describe the pride I had in my son as I watched him cast those huge flies over and over again and hook huge pike and lake trout. His skill increased 10 fold every day. I would find myself just watching him with a grin on my face as he perfected his technique and found success in his labors. There were many moments of us jumping and screaming together as the fish was netted. Many ‘high-fives’ were given as the fish were released. We became much closer than we were before.

As all good things come to an end, we were truly sad by the last day as we pack up and head back to civilization. The ride home was bitter sweet and quiet. It was good to be heading home to rest and go back to our families and obligations, but sad to leave so many uncaught wild fish.

It has been almost 2 months since we’ve been home and we still talk about it and reminisce about the fun times like it was just yesterday. We can’t wait for our next adventure and keep talking about the different options we have to do something like this every year. 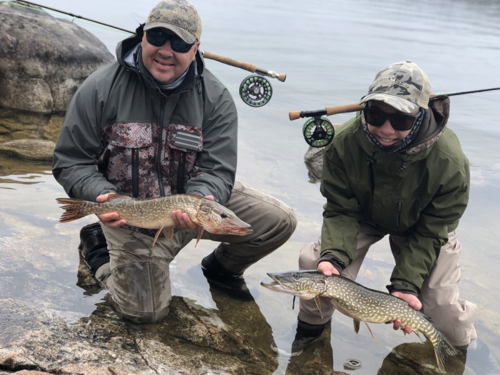 As a father, I never thought that such an event would transform me and give me so much pride in my son and create an everlasting bond that will never go away. I encourage everyone to take their kids fishing often and if possible a good long trip like this one. The time and experience that we shared together during this trip was priceless. They will be times never to be forgotten. 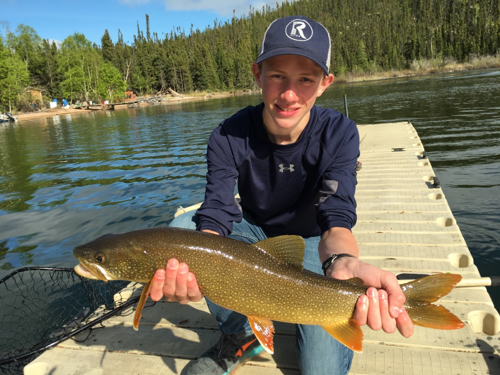 Wow! Sounds like a fun adventure. I agree that fishing with your kids is personally very rewarding. Enjoyed the article.
Jesse, sure enjoyed the story in this month's newsletter about your fishing trip for Pike with you son. Wow. It is now on my bucket list. You did a great job with the story.
2 Comments