Redfish are a near perfect target for saltwater fly-rodder, they are predatory by nature and are very opportunistic in their diet. I land around a 1000 redfish every year on my boat and while my clients release a vast majority of their fish, occasionally we will keep one. Anytime I take a redfish for a client I take the time to open its stomach and do a content survey. It is very rare to only find one prey item, typically you will find a mixture of shrimp, crab, pin fish, mullet and other assorted items. On one particular day we kept a fish off one of our barrier islands here in the Texas Coastal Bend and when I opened the stomach the fish had a couple small shrimp (2/dime), a couple small crabs (4/dime) the head of a hardhead catfish (??) and a small rattlesnake!! 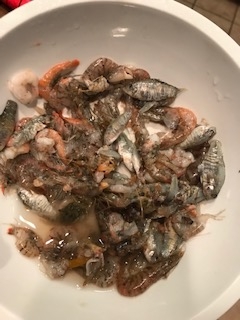 Redfish have a very long life cycle, they can live up to 50 years. A fifteen year old angler can release young redfish and catch the same fish when they are 65 years old! Adult redfish live primarily in the Gulf of Mexico and are referred to as “Bulls”, regardless of gender. They spawn in the fall, October thru December and the juveniles live in the bay system until they become sexually mature at 4 to 6 years of age. A redfish will grow to about 20”s in its first year and then about 2”s per year after that, so a 5 year old fish that is getting ready to join the spawning herd will measure 30”s and weigh in at 10 to 12 pounds. The younger fish will stay in deeper water to avoid overhead predation but as they grow older and bigger redfish move into shallower and shallower water to feed, you will find 30” redfish in mere inches of water!! 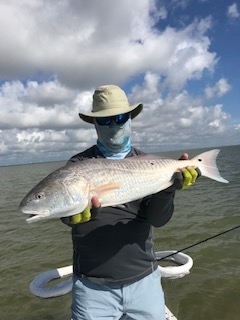 Nice Texas redfish caught in less than a foot of water.

In Texas our coastline is protected by a very healthy barrier island system from one end of the state to the other. The Bolivar Peninsula and Galveston Island on the upper coast, Matagorda Island, San Jose Island and Mustang Island on the middle coast and North Padre and South Padre Islands on the lower coast. These barrier islands keep the adult redfish in the Gulf and the juvenileredfish in the bay system for the most part except in the fall when the spawning herd move in to the passes between the Gulf and the bay systems to spawn. The barrier islands also provide vast shallow grass flats with crystal clear water for fly fishermen to go in search of these wonderful fly-rod targets, in Texas we literally have over 300 miles of flats on the barrier islands!

Our season in Texas is 12 months long, each season has its pluses and minuses. Winter, December - February, here are typically very mild, lows in the 50’s & highs in the 70’s, with an occasional cold front that comes through which can mess the bay system up for a couple days. The water temps are cooler and the grass is gone from our flats leaving them as clean sand or mud flats making for some beautiful sight casting! While spring, March - May, can be windy the sea grasses start to come back up as the water warms up and the grass shrimp hatch follows right along spurring the redfish to move up and feed in “pods”! By summer, June - September, (which can be hot as hell), the shallow flats are covered with sea grass again and the food chain is in full swing causing redfish to loose their minds and feed voraciously on shrimp, crabs, finger mullet and anything else that gets in their way! * Redfish will need to consume 5 times as much food in June as they do in January, their metabolism is controlled by their body temp which in controlled by the water temperature. Fall, October - November, is widely considered to be the prime season here on the Texas Coast. There are many reasons for that, not the least of which are the milder temperatures and it is more pleasant to spend time on the water, but also it is spawning time! The sexually mature redfish are schooling up to migrate to join the spawning herd and the spawning herd in the Gulf are moving into the mouth of the bay to execute their spawning ritual!! 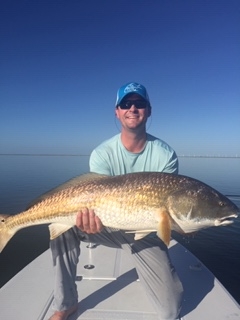 Fly selection for redfish is fairly simple, always remember that they are predators. It is much more important to put the fly in the right place than which fly you are using. Use flies that work in the particular water column you are fishing, such as a sand flat or a grass flat. I will use a Clauser Minnow year round but when I am fishing in grassy conditions I will switch to a more weedless pattern such as “Trimble’s Blind Chicken” and when I am fishing sand or mud flats I will go to a lead eyed fly such as a “Bosky Slider” but any crab pattern will work. In the winter I use smaller flies that I do in the summer. 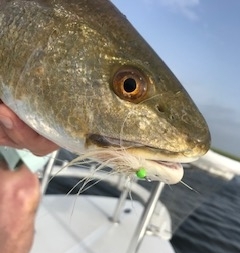 Other species that we target on the coast with a fly rod in Texas are Speckled Sea Trout and Black Drum year round and Jack Cravale, Spanish Mackrel, Skip Jacks, Tarpon and Snook in the summer season.

Capt. Billy Trimble is a full time fly fishing guide that lives in Aransas Pass, TX. and targets Texas Redfish year round. Aransas Pass is in the bulls eye of flats fishing on the Texas Coast and Capt. Billy has access to over 150 miles of shallow water within an hour of his house. Capt. Billy targets Redfish, Speckled Trout, Black Drum, Jack Crevalle, Spanish Mackerel, Tarpon and other species.