When fly fishermen first see these flies, they assume that they’re a variation on Intruders. Not at all. For many years I’d been fishing bunny leech type of flies with a big head to push around a lot of water. The rabbit strips, including “micro” strips, came in an astonishing variety of colors. For winter fishing, that's all I used, first on sacrificial hooks, and then on shanks like Waddington and Predator. Usually the flies were no more than 3” long.

Later, when I began to experience back issues, it became difficult to cast this style of flies. The bunny leech flies in larger sizes, when wet, required heavier, more powerful rods. A soaking wet 4” bunny leech required I go up a weight in rod and lines. Flies longer than 4” were a real hassle, and I couldn’t fish them.
I decided to produce a similar fly that only used synthetic materials that wouldn’t absorb water. Fortunately, I had a wholesale account with Hardline Dubbin. I must have ordered nearly $300 in materials @ wholesale prices. I had a big round table, and it was covered about 3 packages deep! I discovered that some flashabou type materials were extremely limp and not good. Other flashaou materials were as stiff as bucktail. The experimental flies were weighted so that the stinger hook pointed up. The flies were far less prone to snagging, and I could 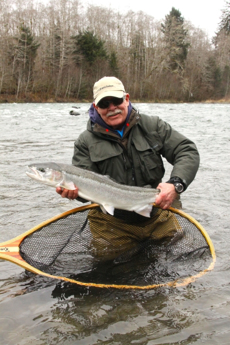 swim the fly in lots of structure without hanging up. These flies also had eyes I hand painted with glitter paint and sealed with 5-Minute Epoxy. This was tedious, but proved a deadly approach, especially when the eyes were glowing ruby red.

Jack Mitchell and I first tested the flies on the upper Klickitat a few years ago. Beautiful day. I’d made up some small SF flies with #4 & #6 hooks. I first held my leader and watched my blue/black fly rock and glitter. The fly was naturally unstable because of the upturned hook. I was fascinated. I waded out just below the launch and made a cast. To my astonishment, a steelhead came out from the bank and raced 25’ to hit the fly. After this happened again, Jack came over. I cut the fly off and gave it to him to fish. A few casts later a steelhead took the fly, raced downriver, and the hook broke at the bend. We fished SF flies all day, and they produced all day.
I’ve been tying and fishing them almost exclusively ever since, especially for winter. They’re very easy to cast, even in larger sizes.

Each March, a group of Japanese come over to fish with me for winter steelhead in the Olympic Peninsula. They are booked through Jack Mitchell’s “The Evening Hatch.” They’ll fish as many SteelFlash flies as I’m able to tie for them!

To see all of Trey's and the other members of the Steelhead Underground team, click here.

Trey Combs invented the way we approach Steelhead Fishing today. He is the author of several books and designer of many classic and contemporary fly patterns. When not writing or designing new fly patterns you can catch him hosting Steelhead trips on the lower Quinault or Klickitat River's.

I have a few prototype's of Trey's SF flash back that he gave me at the Northwest Fly Tying expo held in Albany, OR. a few years ago. Trey and I go way back to the early 2000's. I actually met Trey at the Ed Rice International Sportsman's Expo which was held in San Mateo, CA. I have tied many flies for his blue water fly fishing adventures out of San Diego.
Although I'm not a steelhead fisherman I will put these patterns to good use when chasing LMB. The originals are going in a shadow box and added to my collection
1 Comments