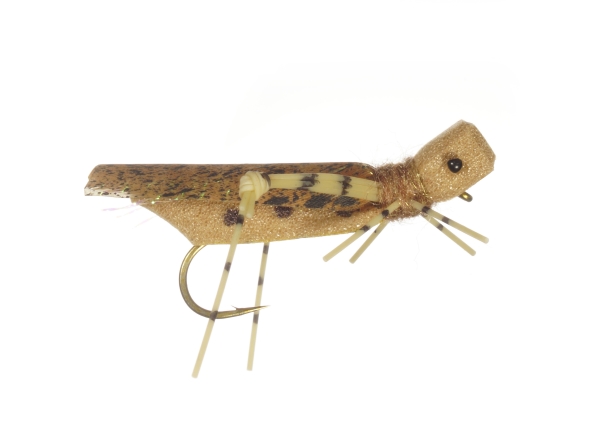 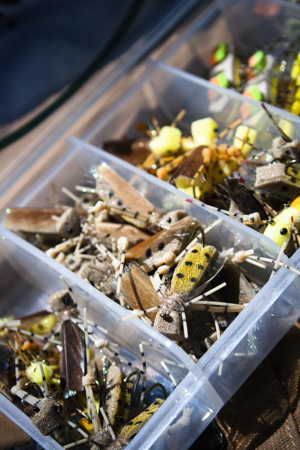 The first prototypes of what is now known as the “Grand Hopper” came off my vise back in 1991. I had already begun adding foam to flies and been producing the Marshmallow Hopper, Foam Post Parachute Mayflies, and a line of hoppers, beetles, and adult stoneflies using my proprietary Float Foam since the mid ‘80s. Back then I couldn’t go to the local craft store to get foam. I had to make call after call to manufacturers looking for someone willing to formulate a foam to meet my needs. Prior to that time, there were a decent number of terrestrial patterns on the market, mostly using “natural” materials. At that time buoyancy was created through the use of deer, elk and caribou hair which has a natural hollow structure to it and, if tied correctly, would keep your flies high and dry…for at least a few fish.

Fast forward to 1991, the industry demanded new fly designs, so I sought out to create new cutting-edge, improved fly patterns. To start the process, I thought I should start by studying the actual insects more for proportions, color, and how they actually float in the water. I went out and caught some grasshoppers, put them in a jar, and watched how they moved and what the proportions were like -- the eyes, legs, coloring, etc. Within a few days, the idea of how to make a better and more “realistic” hopper came to my mind in the middle of the night. It was paramount that they would float high on the water and look more anatomically correct. As mentioned earlier, I had already been commercially producing flies with various types of foams for several years so it was obvious these new pattern(s) would involve foam as well. Using the notes I had made during the night, I used a sample of yellow Evazote Sheet Foam that I had recently received from a manufacturer to make the body. I started cutting and trimming it into different shapes and lashed it onto the hook so it wouldn’t spin and rotate. Then I added legs, eyes, and various kinds of body details and coloring and used a mottled hen saddle to properly match the unique wing of a grasshopper. After getting the fly balance and design figured out, I went back to the foam manufacturer to have them make the foam in tan with the same density and floating properties. I knew I needed to do a tan hopper to match the most common color. A few dozen prototypes and several days later on the water, and you have pretty much the same pattern that you see today.

By 1994, the Grand Hopper was being mass produced by local tyers out of my fly shop in Logan, Utah. It is now tied in 9 different colors in both Original and Hi-Viz. in sizes #4-16. Many variations of the Grand Hopper also are being tied and sold. It remains one of Rainy’s® top selling fly patterns to this date, and, it is still one of the most popular patterns in the industry today.

Rainy’s, Inc. was founded in 1971 by Rainy Riding. Rainy began fishing with flies at the age of 5. She is now a world-renowned master fly designer with over 850 exclusive fly patterns to her credit. She has been featured in many publications and venues world-wide for her timesaving materials, tools and techniques as well as her now industry standard fly patterns.

I have used this fly for years. One of my favorites. I especially like the silhouette in the water. Very realistic.
1 Comments