I've made the switch!
by Paul J. Beel 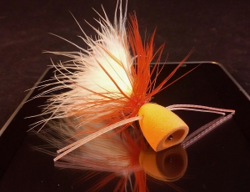 The switch to Rainy's poppers was not a quick one for me, but I am now converted. The delay was probably due to the help I received from friends I had that were cutting foam and sending me cylinders I could use for poppers. These worked ok for a time, but being a professional tier, I needed popper bodies that were readily available, professionally made, and came in a variety of shapes.

I ordered my first batch of Rainy’s various popper bodies back in early 2016. I had primarily used large and small foam cylinders in the past as my main targeted species were smallmouth and largemouth bass. (Don't assume you would only use the large poppers for the largemouth. Smallmouth will eat large poppers with no trouble at all.) Getting a replacement for the smaller poppers was my first priority. This size sells well too. I tried Rainy's Pre-shaped Bass Pops right off the bat and they were perfect for what I needed. They have a nice pop and the foam was much harder and better than those homemade cylinders I was using.

The other type of popper I enjoy using is the Rainy's Mini-Me's in medium. You don't have that flat side on the bottom like you do with the Pre-Shaped Bass Pops, but that isn't a big deal because the hook will make sure it rides right on the water's surface. With the upward cupped oval shape you get a nice splash of water as well. They are close to the same size of popper as the medium Bass Pops, but just a little shorter in length. They are my go-to popper for finicky smallmouth on the creeks and rivers nearest to me. There is no need to continuously strip and pop. Let the popper sit and give it a twitch now and then is a good technique. 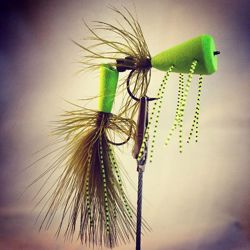 When I really fell in love, was when I started using Rainy’s cone-type popper bodies. I love the size and look of these. After messing around for a little bit, I started with using two hooks and created an articulated popper. I used a full cone on the front hook and one of their Pencil Poppers on the back hook. (#2/0 Partridge Universal Predator hook with the cone on the front and a #1/0 on the back with the Pencil Popper.) It worked great! I also tied a similar configuration using a shank with a medium Rainy's Half Cone on for the front segment instead of the hook. This size fit well on a 40mm shank. I then attached a #2/0 hook to the back and threw in some feathers with a little foam in the back for floatibility and loved how it came out! 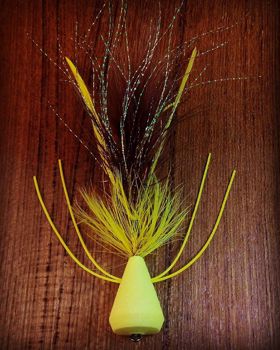 I don't normally go into painting my poppers as I tend to go with the bare minimum so that I can just get the flies tied and get them out the door, but Rainy’s does offer a full line of Popper Paint that you can use to paint your poppers the way you want. I am happy to tell you that all of Rainy’s foam poppers are friendly to nearly every acrylic, oil based, and enamel paints (and glues) available. You can also use a Sharpie (or similar) permanent marker to add a few dots or stripes. If you are like me and just want to keep it simple you can. The finished shape and quality of Rainy’s poppers are good enough to leave plain. It is true that all the gloss and shine is beautiful and looks fantastic, but it can costs you a lot of time. That is actually another good reason I like Rainy’s poppers. Not only are they versatile, but they are super convenient and save me time in tying, are better finished quality, and are made of a more durable foam than other poppers on the market.

It took me awhile, but I finally made the switch and I'm glad I did. With Rainy's coming out with even more styles this year, I may have to add even more to my popper arsenal. I have my eye on those new Lefty's Poppin' Bug Popper Heads for sure!

Paul J. Beel is owner and fly tier of the website and fly tying business, FrankenFly at http://www.frankenfly.com.
He pursued his passion of fishing after watching his grandfather create homemade lures as a kid. He felt he could continue in his grandfather's footsteps as a fly tier. Paul specializes in modern streamers and classic Michigan dry flies for bass and trout.
He is an Orvis Fly Designer and ties for many fly shops in the Midwest. His flies have appeared in Fly Fusion Magazine, Tail Magazine and North 40 Fly Shop Emag. He is also the creator of his own line of fly tying dubbing called FrankenDub.

Paul, Thanks for the nice concise article on Rainy's poppers.
I recently purchased their Preshaped Bass Pops. My question is, how to you recommend attacking the Popper to the Mustad 80300 (sizes 06-10) hooks. These will be my first poppers tied. And, I don't want to screw up the poppers. Thanks for any help.
RJ Adjemian
1 Comments