I was at a conservation meeting many years ago and the fly fisherman next to me mentioned that he had just returned from a great trip to Michigan's Upper Peninsula and that he slayed the carp on a two inch black Woolly Bugger. I returned home from the meeting and immediately started packing bags for my first carp trip. I went right to the spot he told me about, the carp were there and I quickly had my first carp landed with a black Woolly Bugger in its mouth.

So as with many flies, the Carp Breakfast evolved from the Woolly Bugger. Though as I continued with carp fishing I quickly realized that the Woolly Bugger had several shortcomings when it came to fishing for carp. The most important was that the fly must always ride hook-up or you are forever hung on bottom. Adding lead-eyes does a pretty good job of turning a fly hook-up but it still tends to hang as it is drug over the bottom. By using a curved hook and then tying the tail down the bend of the hook it created a parachute effect that when combined with the lead eyes does a great job of always riding hook-up. 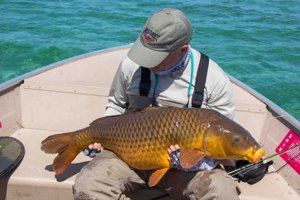 A traditional Bugger tends to drop slow and flat. Carp that are hunting crayfish, sculpins and gobies want a fly that quickly dives head first to the bottom. Not palmering the hackle up the body combined with the lead eyes and thinly tied tail allows the Breakfast, when tied on a loop knot, to dive head first and quickly to the bottom.

The weighted head and parachuted tail makes the Breakfast stand on its head when it hits bottom and any water motion gives life to the marabou tail even when it's just setting there. I know this is a big deal when a finicky carp is intensely studying the fly and finally makes the decision to suck-it-down. I also like the stand-up marabou tail for carp that miss the fly and then circle back, you don't need to move the fly an inch for the carp to see that tail wagging in the current.

I tie all of the tinsel on the tail and collar versus palmering up the body. This allows me tie each fly with as much tinsel as I would ever want. Then when I'm on the water, in a second with my nippers, I can customize the fly with just the right amount of flash. 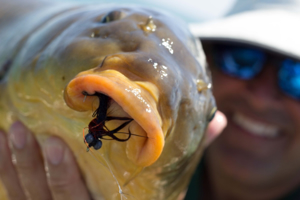 Smallmouth love it too! They seem to go after the Breakfast whenever they see one. Since they are more aggressive fish, they would tear up the original version pretty quickly. Over time I took added steps like the copper wire palmered up the body and the way the hackle is tightly packed near the head to make the fly even more durable.

You fish the Carp Breakfast in two ways: First, on cruising carp, we cast in front of and past the carp, so as not to spook them and then strip back to intercept. The goal is to strip the fly, usually pretty fast, past the face of the carp and then let the fly settle to the bottom just past the carp. Most often the carp will spin forty-five degrees, tip down and suck down the fly. Second, on mudding and resting carp we again cast past them so they aren't spooked by the fly splashing near them and strip it quickly back so it can be dropped just in front of their nose. For deep tailing carp the Breakfast is about the only fly I use because it sinks so quickly.

One tip with the Breakfast and other similar flies is to tie them on a loop when you want them to sink head-down and fast. Then if you want the same fly to sink slower and flatter, tie straight to the hook without a loop.

Kevin Morlock is a full time trout, salmon and steelhead guide for Indigo Guide Service in west Michigan and spends his summers guiding for carp and smallmouth bass on Michigan’s Beaver Island. Kevin has been featured in dozens of national and regional print and television publications over the years.