Feast or Famine. That aptly describes spring/early summer smallmouth fishing. Hit the right places with the right technique and flies, and it can indeed be a feast of one big fish after another. But smallmouth are on the move at this time, they’re preparing to spawn or are doing so, plus water temperatures may fluctuate wildly. All of this makes for challenging fishing.

To hit the springtime bonanza and avoid the piscatorial blues, try to figure out where in the reproductive cycle the fish are. If water is in the 50s, fish are often still bunched up feeding in deeper bank eddies and pools in rivers. Keep moving until you hit a hotspot, because many areas will seem devoid of fish, but select locations yield many big bronzebacks. Deeper running flies like Clouser Minnows and the Holschlag Hare are good for these situations.

If the water is 60 degrees or more, fish have likely started spawning. In both lakes and rivers, smallies will be spread out along shorelines where there are gravel bottoms and 2- to 5-foot depths. Male bass especially like to fan out a nest next to a log or boulder, so this calls for very targeted, accurate casting. And slow retrieves! Only for a day or two during their peak aggressiveness will nest-guarding bass charge out and strike a fast-moving fly. Most of the time, flies retrieved very slowly (with long pauses) are the ticket to success. Topwaters can be deadly now. And while poppers like the Holschlag Blockhead may be great in summer making a lot of noise, now is the time to fish this fly very slowly and quietly.

Drop the popper a couple of feet past the target and let it sit for several long seconds. Then give it a little twitch so it barely “pops,” then another long pause. When it’s over the intended target zone, let it sit even longer between pops. Very slow-sinking subsurface patterns like the Shenks Streamer twitched slowly along can also be terrific.

Bass are looking up this time of year too and a good surface popper like the Blockhead Popper can be just the ticket.

When mid to later June rolls around, in many areas smallmouth can be finished spawning and go into a week or so of post-spawn recuperative period. (I call this the post-spawn funk.) No question, these fish are challenging to catch. Slow retrieves, but in deeper water than the spawning locations, will get some. And fortunately, it is likely that some smallies will already be going into their early summer feeding period. These fish are hungry and eager, and will take a variety of topwater and subsurface patterns. This is also a time when the smaller fish start showing up. During the spawn and pre-spawn, often just the large adult bass are active. But in the early summer period, fish from 8 to 18 inches can all be mixed together. Lakes at this time can see an excellent topwater bite along rocky shorelines in the mornings and evenings. A Blockhead Popper can be fished a little faster and louder now. Rivers, with their lower visibility, often see a fine bite all day in early summer. And in the most northerly of rivers, the warming water of mid-afternoon is prime time for the fastest bite. 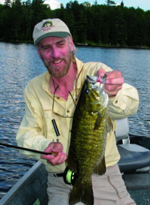 Tim Holschlag long time writer, guide and fly designer is author of five books on smallmouth and creator of the Blockhead Popper. He can be reached at: tim@smallmouthangler.com