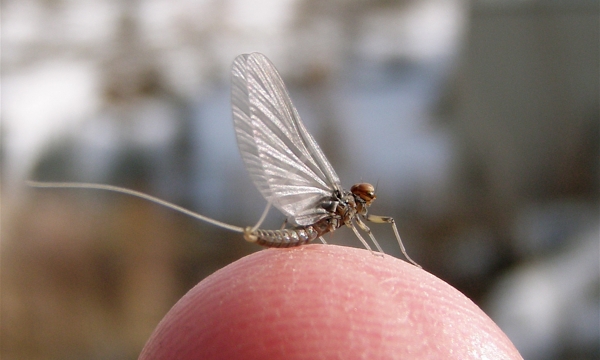 Everyone has felt the effects of cabin fever, but have you ever wondered if fish feel the same way? On cold winter days when water temps are in the mid 30's the fish are often times "stuck at home" locked on the river's bottom in the deep slow runs and pools of the river.... probably wondering to themselves... "when is it going to warm up!" Alright, so they probably aren't thinking those exact words, but suffice it to say they must be anticipating warmer temps, increased bug activity, and freedom to roam all water types in the river. With that anticipation they welcome the first hatches of the year.

Midges are the first insect to really get going, and a solid midge hatch can produce some fantastic fishing, but have you ever seen a blanket of midges on the water's surface with a single lonely blue-winged olive mayfly drifting between them? If there's a trout around, more times than not, it's going to aggressively pursue the single BWO over the multitude of midges. For a reason unknown to us, the slightly larger mayfly is far more appealing to trout.

This was made apparent recently on a popular tailwater here in the West. Myself, and two of my good friends Phil Tuttle and Derek Kohler were in the middle of a solid midge hatch when all of a sudden the trout no longer cared for our midge imitations. Fish were still rising, but not to our flies which they had been crushing just minutes earlier. It took us a few minutes of observation to realize that there were a few BWO's popping up in the midst of the midges. It was then no wonder why they were no longer interested in our offerings... they had switched to their preferred meal of choice, the blue-winged olives. Despite there being 10-1 midges to mayflies, they had made their choice, and it was up to us to adapt.

To Check out Gilbert and Phil’s recent film about fishing BWO’s click here: 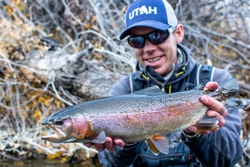 Gilbert Rowley is a fly fishing enthusiast that loves to share his knowledge on the sport with others. He is a Utah native and fishing guide and currently guides on the Provo River. He is an avid fly tier/designer, acclaimed filmmaker, and runs a website called Fly Tying 123. Gilbert graduated with a Bachelor’s in Fisheries and Aquatic Science from Utah State University. Photography and entomology are among his favorite aspects of the sport, and he believes that with the right tools and instruction anyone can learn to love fly fishing. He recently teamed up with two members of Fly Fishing Team USA–Devin Olsen and Lance Egan–to make two videos entitled “Modern Nymphing”, and Modern Nymphing Part 2 which teach European fly fishing techniques. Adaptive Fly Fishing, their 3 rd film in the series just came out in April 2020.

Good job Gilbert. I follow all of your videos and film tours. You are one of the best.
Very nice. I appreciate the info and pictures. Helps me understand the hatches better.
2 Comments