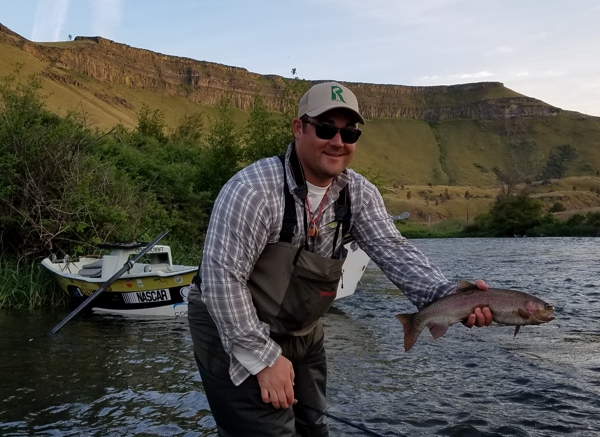 It’s that time. Salmonflies on the Deschutes and other Western rivers are just a few weeks away.

I realize that many of you are busily cleaning your floating lines, making sure your reels have plenty of backing, anxiously awaiting reports of what river location the bugs are on the streamside vegetation, and going through your own personal rituals of getting ready for the world-famous appearance of Salmonflies on rivers such as the Deschutes and other famous Western rivers.

Many anglers wait for the arrival of Salmonflies and Golden Stone adults landing on the water followed by explosive surface takes. It’s dry fly heaven!

If you wait any longer, however, you may be missing some of the most exciting fishing of the year. 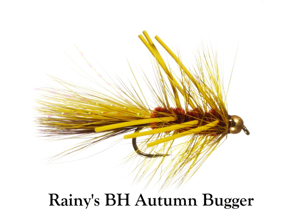 A recent evening trip to the Deschutes found me refining my Euro Nymphing techniques while my favorite fishing buddy, son Tosh, proceeded to swing size 8 Rainy’s Beadhead Autumn Buggers through one of our favorite riffle -pools. After Tosh landed the biggest fish of the evening, I noticed he was using a floating line and a standard 9 foot leader. I asked him how he was fishing the Autumn Bugger when the fish grabbed. His response was that he was swinging the fly through the water column with no retrieve. This was definitely an out of the normal stonefly presentation, but it was a deadly technique.

The next few days found me on the fly club presentation trail in Western Idaho. I was surprised that my son decided to head to the Deschutes after work for a second go around. As they say, “It’s a long way to Tipperary” (90 miles each way) for an hour or two of fishing, but that’s the magical addiction that afflicts anglers at this time of the year. My son’s fishing report justified the long drive. In a little over an hour he hooked a nice number of robust fish starting with a nice fish his first cast. Only darkness could end his venture.

So, what’s the point here?

This is the time of the year when the giant Salmonfly (Pteronarcys) and their cousins the Golden Stones (Hesperoperla/Calineuria) nymphs migrate towards shore to break out of their subsurface “skins”. This migration towards shore may be likened to an intoxicated person trying to cross the street in a hurricane. The Pteronarcys & Hesperoperla nymphs are weak swimmers and are subject to be dislodged while migrating. It doesn’t help that their preferred habitat is fast-moving currents. At this time of the year the nymphs have reached maturity and are large and tasty. Mr. & Ms. Trout know this and are waiting to dine and dance.

To simplify matters, ask yourself if a Deschutes Redside would rather eat finger food or a Big Mac? I’d opt for a Big Mac in the form of a Pteronarcys or Hesperoperla nymph.

Keep in mind that the nymph’s primary migration is nocturnal. I have witnessed many nymphal “shucks” (exoskeletons) on my driftboat in the morning where none existed when I drifted streamside into Salmonfly & Golden Stone dreamland. Also keep in mind that these nymphs thrive in highly oxygen-rich water and are most likely to inhabit in greater concentrations in these faster currents where they receive plenty of O2.

It’s essential to match your tackle to the conditions. We’ve found that floating lines with standard 9 foot leaders are an effective choice with weighted flies. We’ve also found that specialized sink tip lines in weights 5 & 6 with leaders from 4- 9 feet with un-weighted patterns are highly effective in drifting the nymph patterns through riffles and fast currents .We especially like using the original Teeny Mini-Tip which features a 5-foot sinking tip in weights # 5 & 6. Whether you decide to fish a floating line or a Sink-Tip, a simple swing of the fly imparting no motion often brings hard pulls from aggressive fish. Alternatively, imparting a small amount of motion through short pulls of the flyline or small lifts of the flyrod tip can also induce strong takes. Remember that these nymphs do not swim, but are pulled by the current and drift when they are dislodged from the stream -bottom in their annual migration to shore.

This phenomenon does not necessarily end after the salmonfly hatch has concluded. Etched into my memory is a time in late June in what I call the “death march” of my much younger self. Wearing bootfoot waders I hiked miles down the Deschutes to reach remote fishing spots. In addition to the painful memory of near dehydration and heatstroke, I remember swinging nymph patterns into bank side water no more than 1-2 deep and having multiple large Deschutes Redsides engulf the fly and proceed to run to the middle of the river with me in tow.

So, if you were awaking from a long winter’s “nap”, would you rather eat a small plate meal or a Big Mac? I’d opt for the Big Mac. I think trout feel the same way.

My home state of Oregon has now closed recreational angling to most waters for non-residents. They were forced to do this as the COVID-19 pandemic in neighboring states caused an influx of non-resident anglers to Oregon waters, increasing the potential spread of COVID-19. It is currently unclear as to the traveling restrictions of Oregon anglers. The Oregon Dept. of Fish and Wildlife is discouraging Oregon anglers from traveling long distances to fish. Even though we know that angling provides the opportunity to distance from others, it is assumed that the major concern in limiting travel is to prevent introducing COVID-19 to rural areas where medical facilities are very limited.

Please pay close attention to the regulations/recommendations governing where you fish. Irresponsible behavior involving ignoring social distancing not only ruins everyone's opportunities to enjoy the outdoors, but it threatens the life of everyone.

Be smart. Be safe.

Dick is an "Unique" person who loves all things related to angling, especially to fly fishing - from Tenkara, Tight Line Nymphing, Single-handed and Two-handed steelhead fly fishing, lake fly fishing, and river fly fishing for any species that will give his spirit a tug. He is a manufacturers sales rep in the pacific northwest and northern rockies.

I'll be heading there this weekend. I hear the stones are moving around.
Nice article Dick! Makes me hungry for the Deschutes. I'll have to stick to Idaho for now.
2 Comments