To be a more a successful fly angler, using flies that have a life like movement will always give you an edge when targeting predatory gamefish. Breathability and movement are two of the most important attributes to get a fish to eat your fly. This mindset led to the evolution of the BC Baitfish. The fly is designed to entice the bite of any gamefish that eats baitfish, freshwater or saltwater. It has caught freshwater fish such as trout, landlocked striped bass, largemouth bass, spotted bass, hybrid bass as well as saltwater fish like striped bass, redfish, sea trout, snook, Spanish mackerel and more. The articulated tail design encompassed with the angled foam head creates a swimming action that looks just like a living baitfish. The fly was designed to be fished sub-surface but can be tied to fish on the surface (top water) as well. One of the BC Baitfish’s attributes is its balanced weight, which allows this fly to suspend and elicit more strikes.

Birth of the BC Baitfish

Several years ago, I was fortunate enough to play with one of Blane Chocklett’s “Pre”-Game Changer articulated baitfish patterns made from sections of his Sili Skin material that formed a tail that swam like a swimbait. His fly was my first inspiration to create the BC Baitfish. A few months later, I saw a lure called a Lucky Craft Live Pointer. The Live Pointer’s tail section was made using multiple tapered plastic disks attached to a metal spine. It moved like the jointed wooden snakes I remembered as a kid. I started trying to figure out how to make a fly using a similar design as that Live Pointer. One day it just hit me – BEAD CHAIN! If I used bead chain for the spine and foam disks for the tail sections, I could emulate that Live Pointer action in an easy-to-tie design.

The fly has been through several renditions during the last six years. I tied the first pattern using one strand of bead chain, which allowed the foam discs on the tail section to spin. The spinning discs prevented me from painting the back of the tail section, which kept me from creating more realistic baitfish patterns. The current version uses two smaller strands of bead chain that stops the foam discs from spinning, doesn’t impede the swimming action and allows me to use different colors on the tail section.

To make fly swim properly, I cut the front of the foam body at an angle on the front-end; so the bead chain can to its job on the back end. Initially, I also had an issue with the fly spinning when stripped hand-over-hand or swimming in a fast current. Thanks to advice from professional fly designer and guide Henry Cowen this problem was fixed. He recommended tying in lead wire on the hook bend to create a keel weight. Problem solved! No more spinning.

The techniques used in tying this fly have spawned a plethora of other baitfish, crustaceans and other prey type patterns such as swimming poppers, crabs, shrimp, crayfish, eels, a mouse, and frogs.

The BC Baitfish can be fished in multiple ways – using a one handed strip for erratic action, a continuous hand-over-hand strip for non-stop swimming and swinging the fly in a current. All of these techniques will result in the tail wiggling and swimming like the dickens. Jesse Riding, Manager of Sales/Products Development at Rainy’s, told me he had caught so many fish on the BC Baitfish that he had been repairing the few sample flies he had fished to use them again. If he continues to be nice to me, I might tie him a few more…

Follow the below link to see the BC Minnow in action. 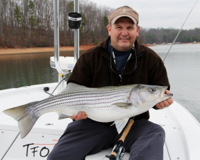 Kevin’s professional experience spans more than 15 years along with personal fishing skills developed since his childhood. Kevin guides north of Atlanta on Lake Sidney Lanier for striped bass and on the Chattahoochee River for carp. He has also guided on the Chattahoochee River for trout and several trout streams in North Georgia. Before guiding, He worked both full- and part-time during a three-year period at The Fish Hawk in Atlanta, Ga. -- the largest privately owned fly fishing shop east of the Mississippi River. As an accomplished fly caster and instructor, Kevin is often called upon to teach fly tying and casting for adults and children. He also conducts fly fishing presentations and seminars at trade shows and organizations. Several of his flies and instruction on how to tie them have been published -- including a feature article in Saltwater Fly Fishing magazine. Most recently, Kevin became a Professional Fly Designer for Rainy’s Flies.