Anticipation of the TUG!
by Joe Cordeiro

Every spring, Northeast anglers await the arrival of the striped bass aka “stripah”. Their migration is prolific and the anticipation 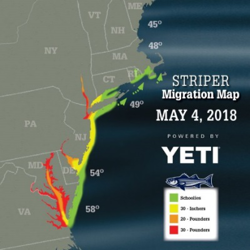 of the tug is even more alluring. Understanding their migration path has become easier with technology providing their travel points along the eastern seaboard from maps on the internet. Anglers can see every movement the stripers are making; it even provides a filter of the size of fish.

This migration is generally lead by the “Schoolie” bass. These are the recreational “non-legal” fish which arrive in large numbers. The arrival of the schoolies from Mid-April to Mid-May varies based on weather conditions and water temperatures. They are found mostly in the estuaries and the backwaters, which have warmer water temperatures and where the bait are most abundant. For us fly fishers the backwater estuaries and creeks are a fly fisher’s paradise and a premier location to catch you first striper of the season. These schoolie fish are fun to catch and release especially with a #8-weight fly rod. I recommend the #8 as you never know there might be a cow striper mixed in with those rat schoolies. 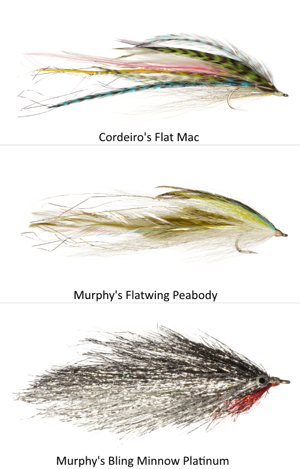 What drives these fish to Northeast locations are the bait they feed upon. The list of early bait species are alewife, blue back herring, sea herring, and a concentrated amount of mackerel appear in Cape Cod bay. The same holds true for us saltwater fly fishers as does the typical trout fly fisher; you will need to “match the hatch”. You will need flies in your arsenal that match the bait species such as Mackerel ( Cordeiro’s flatmac ), herring (Murphy’s Flatwings), and smaller estuary bait like spearing ( Silversides) (Murphy’s Bling Minnows) . The arrival of larger, keeper striped bass (28+ inches in length), follow shortly after the schoolie stripers. While schoolies do stay and some continue to the north. Striped bass remain in northeast waters until the late fall when they begin their migration back south for the winter. The late fall migration is another anticipation for excellent opportunities to catch this sought after Northeast fish.

I am not sure if it is just the anticipation of spring or the happiness that winter is over, but I cannot help myself from not thinking about when the first stripers will show up in my waters along the south coast of Boston. I plan for their arrival and think about the first tug; because the “Tug is the drug!”

If you have never caught a striper on the fly, I highly recommend a trip to the Northeast especially south of Boston towards Cape Cod as it is one the best places to fish for stripah’s.

Joe Cordeiro has been tying flies for over 25 years and has fly fished most of the waters south of Boston towards the cape and the islands for nearly that same time. His salt-water fly patterns have been tested in these waters for their imitation to the bait they mimic. He guides out of the Humarock Boathouse go to www.humhappy.com he will be happy to show you the ways to fly fish for stripers.

nice article joe. very informative.
Can I buy some of these flies directly from Rainy's or do I need to go through a dealer?
2 Comments